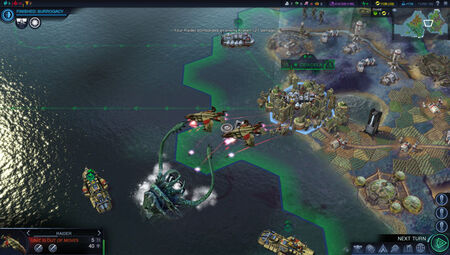 Cities and Outposts are major mechanics within Civilization: Beyond Earth.

Cities and Outposts are the major mechanics behind humanity in Beyond Earth. When cities are first founded, they will be set up as outposts. Over time, outposts will begin to grow into a city as it acquires new tiles. If an outpost is captured by an enemy, it is destroyed, as only cities can be fully converted (the only exception being if the enemy has the Might virtue Liberation Army, which will negate this constraint.)

Culture is a resource that allows for the expansion of your borders and cities through the use of works of art, science, and technology. This resource can be boosted through culture-increasing buildings, and is produced passively.

Each outpost and city has various designs depending on the technological leve, affinity, and virtue of the civilization.

Outposts typically appear as small settlements, and will gradually increase in size until a city is established.

When an outpost matures into a full city, its appearance changes. Additionally, production, trade, and more are now unlocked.

Cities also change appearance depending on your choice in virtues. Purity cities take on a more human appearance, and typically are brownish in color; Supremacy cities are white and gray; Harmony cities integrated stark white buildings with alien structures.