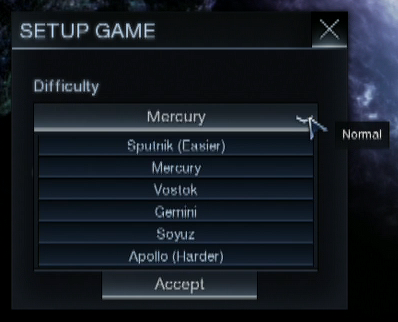 The gameplay of Beyond Earth is a hybrid of long-standing 4x gaming and unique Firaxis design.

There are several distinct difficulty settings in Beyond Earth. These difficulty ratings will determine the relative strength and prowess of the built-in artificial intelligence systems. The following ratings have been confirmed for the game:

Beyond Earth has several victory conditions; while this continues the tradition of classic Civilization games, only one of these victories are common to the other titles in the series.

Covert Operations, also called Covert Ops, is Beyond Earth's answer to Espionage in previous Civilization games, though it is dramatically expanded. In addition to the staples of Espionage, providing vision of enemy cities, diplomacy to change voting habits and patterns, and intrigue which reveals the inner workings of the city itself, Covert Ops agents have a set of options available to them to better carry out their mission. After successful operations, Agents can be promoted up to 4 levels increasing their success rate.