From Civilization: Beyond Earth Wiki
Jump to: navigation, search

Harmony is one of the three affinities in Beyond Earth, the other two being Purity and Supremacy. 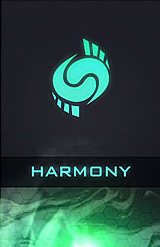 Embracing an Affinity in Sid Meier’s Civilization: Beyond Earth will define how humankind changes to survive on the new planet which they call home. The Harmony Affinity is themed around a faction’s integration with the alien planet. Players who decide to develop the Harmony line will transform their people through genetic manipulation to become one with the alien environment. Units and buildings take on more organic forms, so you end up with tons of cool unique units like tanks that look like living creatures.

Harmony has many benefits, but the biggest and most exciting one is having the planet on your side. Everything that was so scary at the start of the game (miasma, hostile aliens, and giant worms for example) can now be utilized to your advantage. You won’t forget your first siege worm. Neither will your enemies.